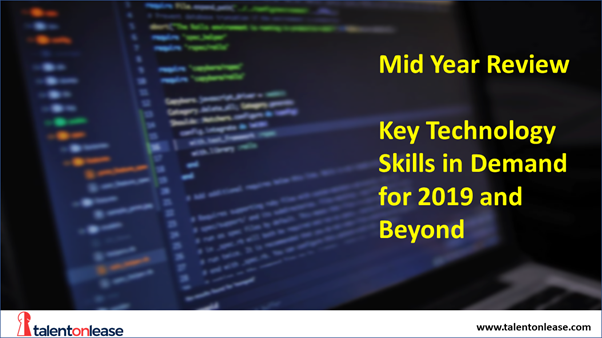 For talent recruiters across the world, scarcity of talent and the unavailability of the requisite skills that they might need three to five years down the line is what hinders them from approving candidates despite them fulfilling most of the present criteria and possessing the right skillsets.  Experts say that every five years, a learned skill loses half its value to something better, which comes into play to take its place. Which means that a person hired five years ago with a particular skill set might no longer be of value to you and your organisation in terms of the work that you’re doing.

As a result, companies are being motivated to embrace newer models of work in order to mitigate risks and keep themselves future-ready.  One such model is to make use of a contractual hiring model by tapping into a vast pool of highly skilled contractual workers who prioritize keeping their skillset up-to-date much more than full-time employees at various organisations.

With half of 2019 over, here’s a look at some of the most highly sought-after technology skills that companies are prioritizing in order to make themselves future-ready and bridge the existing skill gap in their organisations.

Cloud computing skills and cloud technology proficiency is one of the most highly coveted skillsets in the IT industry, and that is primarily because of the fact that cloud is the perfect amalgamation of some of the most other highly sought-after skills in the industry like artificial intelligence, Internet of Things.

With the emergence of cloud, more and more companies are racing to shift their server from a classic one to a cloud-based computing solution in order to reduce operational cost and bring speed, accuracy and powerful data processing capabilities.

Presently the public cloud services market in India is witnessing a phenomenal growth and is expected to reach a $4.1 billion figure by 2020, hence increasing the need for computer science engineers, cloud architects, or IT professionals who are cloud computing/AWS certified.

With growing demand and widespread adaptation of machine learning in almost all walks of life, enterprises and start-ups have started wholeheartedly recruiting IT professionals with a wide machine learning skillset along with up skilling their existing workforce by making them machine learning proficient.

Machine learning can be applied to almost every industry, including healthcare, education, finance, automobile, sports and finance. As data collection and its utilisation gets more sophisticated, so emerges the need to learn from it, and empower technology and its components to function accordingly.

Increasing data availability combined with enhanced computing capacities and innovations in algorithmic processing together are the primary driving factors behind the imperative growth of machine learning and its increasing presence. With continued exploration large scale enhancements in the field of machine learning, the skill is expected to become one of the most profitable ones of the futuristic era with a massive surge in demand expected over the next decade.

With the onset of cloud applications in our day to day life, the need for automation has risen tremendously, and this has given birth to a massive demand for AI in almost all walks of our life.

Over the last year alone in the US, AI-based companies have received more than $9 Billion in funding, and by the end of 2020, AI is expected to generate around 2 million new jobs.

The exponential rise in AI adoption is set to empower automation in sectors like autonomous vehicles and unmanned drones along with its software applications playing a cutting-edge role in sectors like healthcare, finance, insurance, R&D projects, and supply chain management by driving better decision-making capabilities and efficient governance.

Thus, birthing this massive need for companies to recruit experienced AI professionals in an industry where 70% of the workforce has joined in the last five years itself. With barely 40,000 working AI professionals in India, it’s hardly a surprise that 57% of the companies recruiting are simply struggling to find the right candidates, hence driving up salary packages of the entire industry.

Mobile applications are booming, and almost every product or company prefers to have a mobile application these days. By the end of 2020, there are estimated to be around 3.5 billion smartphone users in the world. Correspondingly, this signifies the massive demand for mobile applications and the need for companies to reach out to this massive user base.

There is a sense of deeper commitment that users associate with mobile applications on their devices, and this has driven that coherent urge for companies and products alike to invest in mobile app development. With revenues from mobile apps set to reach $99 billion by the end of 2019, the need for highly skilled and proficient mobile application developers is set to reach unexpected heights in the next five years.

Plus, with the impending arrival of 5G technology and highly improved interconnectivity among mobile users, major tech companies are now working continually on providing mobile-friendly services and platforms for their users.

Data science is a amalgam of data analysis, algorithm processing, and technology which is emerging as the most sought after skill due to its analytical nature and complex problem capabilities. Because of its impact on big enterprises and start-ups alike, the demand for data scientists is growing rapidly, now more than ever.

As Big Data, algorithm economics, IoT, and Cloud continue to become mainstream globally, businesses continue to employ data scientists in large numbers because of their ability to unveil better solutions to age-old problems and even highlight some problems which were previously completely unknown.

In our ever-expanding universe of data, identifying key insights and transformative patters through extensive research and analysis is something big enterprises are more than happy to pay the big bucks for and that is where data scientists are coming into the picture. With more than 144,000 data scientist jobs on LinkedIn alone, the need for improving existing processes and products is already being realised globally and this will only increase extensively in the next decade.

In essence, while there are a lot of skills which are seamlessly in demand globally in 2019, these are the few that will continue to have a massive net-positive demand and will continue to disrupt this fast-changing IT landscape over the next ten years.

Additionally, as companies continue to embrace newer work models to make themselves future-ready, making certain jobs obsolete there are some avenues where jobs will continue to be created and where skills will be in even greater demand, and this is primarily because the entire orientation of the IT industry is changing.

With greater exploration, growth and further innovation in the industry, there is bound to be greater market demand and increasing skill gap in majority of the companies over the next decade, unless the problem is tackled head-on and from an early stage itself before the demand becomes much greater than the supply.

Are you Ready for the Future of Workspace?

0
0 Comments
Are you Ready for the Future of Workspace? Digitization
Read More
Uncategorized

Zero Bench and Contract Staffing A Marriage Made in Heaven

0
0 Comments
A lot of companies, these days, face the issue
Read More